I don't have a good success rate with Disneyland. The first time I went was two weeks after arriving in the States, back in 1996. Last century. I've honestly attempted to go back but it's never worked out. LK and I tried to go with his sister and her kids about 7 years ago, but my boss wouldn't let me have the time off work. Funny, I don't work there any more. We tried again a few years later, but the morning of our scheduled departure I decided to get a bit of early triathlon training in, cycled into a tree and badly broke my collar bone: 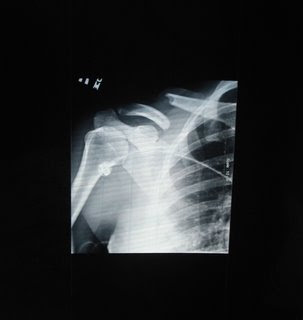 We called my sister-in-law from the ER to say 'sorry to break it to you' pun intended, and she suggested I get bandaged up and hold the bags and sodas while they went on the rides. I think she was joking.

On Monday night Anna woke up screaming in pain. She's never been a crier so we knew something was horribly wrong. After what seemed like hours of 'use your words', 'point to the owie', 'stop crying or I'll really give you something to cry about' (my suggestion not LK's) we concluded that something was hurting in the ears/mouth/teeth area. We did what any thoughtful, caring parents did and dosed her up on baby Tylenol, put Wonder Pets on extended play and kept our fingers crossed our trip to Disneyland hanging in the balance. She eventually fell asleep and that was that. Another Disneyland nuclear-mushroom-cloud averted.

Or so we thought.

Turns out she had hand foot and mouth disease. We noticed the blisters on her hands and feet when we put her in her carseat to drive back home to SB. It's a fairly mild but incredibly virulent virus that is now affecting every single child under five who went to Disneyland on Tuesday.

Our bad.
Posted by AliBlahBlah at 1:58 PM

Are you and LK doing your part (with the help of Anna of course) to dose the gene pool with a touch of chlorine . . . er . . . hand, foot and mouth disease? Nice one!

Poor Anna! The only other person I've ever heard of getting that was my ex-boyfriend (Fahey!) his brother, who'd spent all summer living in a yurt. I figured he deserved it for that. When Minnie calls your house don't answer it.

Poor mite. On the bright side I think I've finally mastered how to leave a comment on this bloody (Somehow that word doesn't seem right unless joined with Nora)website without 20 minutes of angry keyboard banging. Prepare for daily critique Mrs Blah Blah!

That sounds miserable, I hope she gets better quickly. I was still in England last (animal) foot and mouth outbreak--the last two days of Lent Bumps was cancelled because of it, would you believe (rowers spread diseases, or something, was the excuse).

oh - poor anna! i hope she is felling better soon.

Thankyou all you lovely people. The creature is now fine, running around causing havoc like usual. No need to cull a million sheep this time.

AliBlahBlah
Neil Diamond sums it up: SB’s fine the sun shines ‘most the time, and the feeling is laid back. Palm trees grow and rents are low (?) but you know I keep thinking about making my way back. I’m North of England born and raised but nowadays I’m lost between two shores. SB’s fine but it ain't home North Yorkshire’s home but it ain’t mine no more.......

"You find sometimes that a Thing which seemed very Thingish inside you is quite different when it gets out into the open and has other people looking at it.”

"I'm living so far beyond my income that we may almost be said to be living apart."